In mid-June trials work at PTS was suddenly brought into extremely sharp focus with the establishment of a Royal Air Force parachute display team, and the directive that this team was to make its official debut at the Society of British Aircraft Constructors (SBAC) Farnborough Air Show in September.

* Coined during training. Groups of three, four and five, leading up to the “Big” six.

During this whole period,as mentioned above, in parallel with our work at PTS, Norman Hoffman had formed his own Display Team, the British Skydivers, operating under BPA regulations. Norman, Jake, Tommy, Geordie Charlton and I were jumping each free weekend and competing in the annual National Championships with some success and representing Great Britain at World and International Championships from 1961 onwards. In June 1963 we entered the European competition at Leutkirch in Germany and took gold medals in the team event, against strong opposition including the US Army team, the Golden Knights. 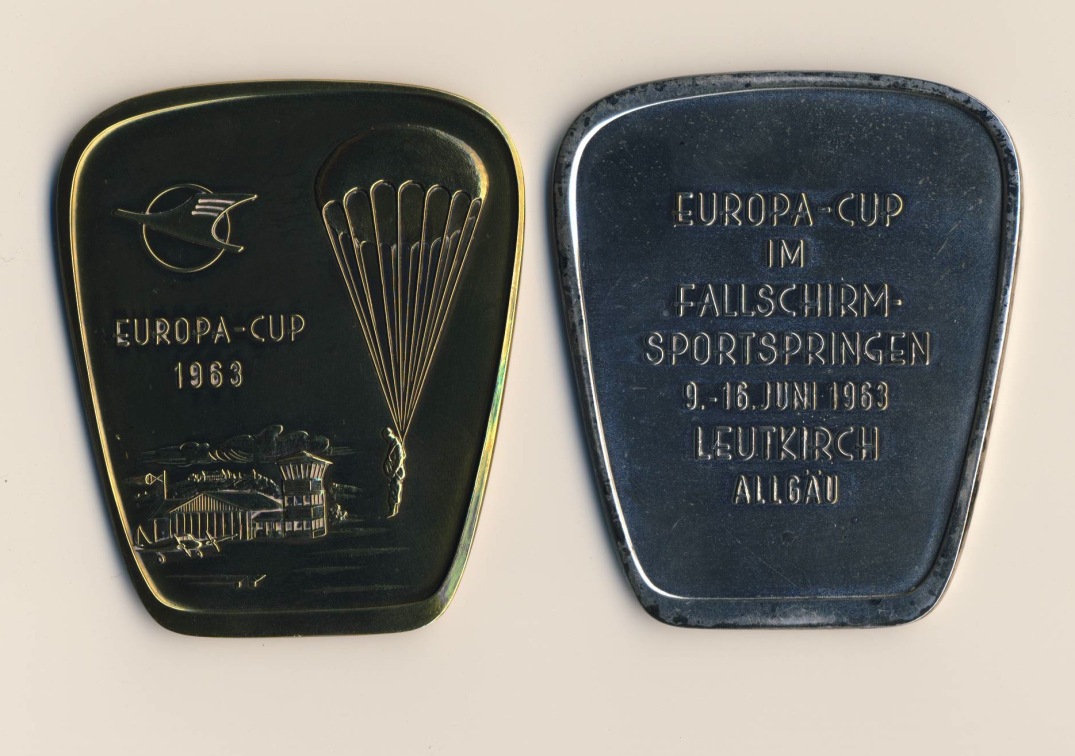 On our return to Abingdon, we were summoned to the OC’s office, presumably to receive official congratulations. Wrong. In company with Jake and Snowy, we were summarily given to understand that we would all be posted off PTS at the first available opportunity, the reason given being that, in the opinion of the OC, we had been around the Parachute Training School for long enough. Wing Commander Bernard F. Stannard was undeniably the boss and, by the end of the year, Norman had gone to Kenya, Geordie to Aldershot, Jake and Snowy to Singapore and I was on my way to Cyprus. With Peter Hearn also posted to Singapore, and Tommy commissioned into the RAF Regiment, the diaspora of the sport jumpers from the hangar was complete.

Meanwhile, pace the OC, at PTS all our sporting initiatives had not been in vain. Moves were underway to create an official RAF Abingdon Sport Parachute Club, presumably on the premise that if you can’t beat them, join them. Under the chairmanship of Squadron Leader Mike Stamford this Club came into being in August at Weston on the Green.We had taken delivery of a de Havilland DH89 Dominie trainer from the Royal Naval Air Service, at a cost of £400. 00. This princely sum included numerous spares, including two extra engines. On 28th August 1963, with Mike Stamford running the programme we flew three inaugural lifts, two at 5,000 feet and a final lift to 7,000 feet. Jumpers were Norman Hoffman, Tommy Moloney, Jake McLoughlin, Geordie Charlton, Robbie Robertson (“Big Rab”, not Snowy) Mike Stamford and myself. Our pilot for the day was 47 Squadron Beverley captain Flight Lieutenant Crawley. The RAF Abingdon Sport Parachute Club, later to become the Royal Air Force Sport Parachute Association, was born.