By 1960 opportunities had arisen for staff members to be trained in freefall techniques. There was now a Special Forces training requirement, and PTS had to quickly adapt to the task. The previous year (the then) Flying Officers Peter Hearn http://www.amazon. co.uk/Parachutist-Peter-Hearn/dp/0709154135 and John Thirtle, along with Flight Sergeants Alf Card and Tommy Moloney, had attended a freefall course at the French Airborne Depot (BETAP) in Pau and they formed the instructor cadre back at Abingdon.

(French protocol dictated that the student logbooks were filled by the Directing Staff. S.O.R. is the abbreviation for Saut Ouverture Retardée – Delayed opening jump).

This time, as opposed to 1954, the benefits were immediate and permanent. Freefall was now firmly on the PTS agenda.  And in 1959 PTS provided a demo team for a tour of Australia. (below).

1959 Tours to Australia and New Zealand

In mid-June trials work at PTS was suddenly brought into extremely sharp focus with the establishment of a Royal Air Force parachute display team, and the directive that this team was to make its official debut at the Society of British Aircraft Constructors (SBAC) Farnborough Air Show in September.

* Coined during training. Groups of three, four and five, leading up to the “Big” six.

Although there were only six jumpers, the Beverley freight bay was quite crowded. On the two minute call, we ducked under the lashing tape strung at waist height and linked arms with feet poised for the step-off. Kneeling in front of us were three assistants, one helper for each two jumpers, whose job it was to unzip the chalk bags on the red light and to start the stopwatches on the green. The AQM (loadmaster) was hanging to one side, halfway up the bars on the wall. It was his job to co-ordinate the exit by giving the GO signal on the navigator’s green. Such was the novelty there were invariably at least half a dozen photographers straining on their safety belts. The exit at 9,000 feet was a step backwards, arch, and try immediately to lock legs. We held on for the full twenty seconds, which took us down to 6,000 feet, broke on time and tracked outwards for ten seconds, turned in the track for the opening point and opened at 2,000 feet on altimeter. My logbook shows nine group six exits in total before the show, three of which were carried out at Farnborough itself. The final rehearsal was at Weston on 1st September 1961, group exit in six from 9,000 feet for Pathe News. We used Pains Wessex orange smoke canisters on this occasion, although chalk bags still continued in use for some time. The SBAC Farnborough Air Show opened for us on Tuesday 5th September. Cloud restricted us to 3,000 feet, we jumped side door sim. 3s and all made the area. We jumped again on the Thursday and Friday, from 4,500 and 5,000 feet respectively. Although we were disappointed we could not demonstrate the high show, it was nevertheless useful experience and confirmed our canopy handling capabilities. Saturday 9th September was the first open day, the weather was brilliant and in front of an estimated audience of 120,000 we performed the bomb burst from 9,000 feet. Two and a half minutes after stepping from the sill our six white canopies were overlapping the orange target cross in the middle of the triangle. This was the culmination of eight months hard work and was one hell of a buzz. It was my 72nd jump. Next day, Sunday, we were restricted to 7,000 feet, but still put in the bomb burst and were all on target.

On 15th December we flew out to the French Airborne parachute school (BETAP) in Pau, with the Command rugby team who had an away fixture there. In the morning, we jumped from 8,000 feet on to their DZ from the Beverley as a five group, our linked exit arousing only a mild curiosity from our French Army counterparts. That afternoon their team jumped from the Nord Atlas into the downtown rugby stadium prior to kick-off. It was a perfect day, wall-to-wall blue, and the team of six came streaking out of the sky from 10,000 feet trailing chalk, heading for the far end of the stadium. The DZ party lit a smoke flare, showing a 180-degree wind shift. From about 5,000 feet, the formation swept round in the track and hurtled for the new opening point on the upwind edge. They smoked it down to about 1200 feet and landed their EFA 653 single T blank gore canopies in the centre of the pitch. All, that is, save one who opened a little lower and finished up on the road outside the stadium only to be triumphantly escorted back inside by a couple of gendarmes who had halted all the traffic to ensure him a safe landing. This was a demo par excellence from our mentors, but, in display techniques at least, we felt we were now not too far behind them. 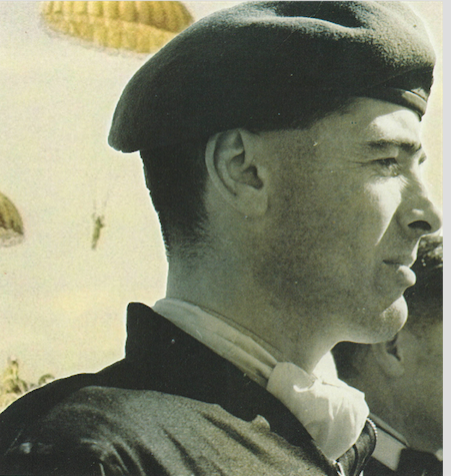 Ron originated the system of working out the opening and release points using the balloon and theodolite. We released a met. balloon with a known rate of ascent which was tracked by theodolite and readings taken every 1000 feet (Stopwatch timed). Every 1000 feet the angle and bearing was recorded. Ron then transferred these figures to his aircrew slide rule and translated them to a distance and bearing. These figures were radioed up to the a/c and marked on the airphoto to give us the run in track and opening point. This was absolutely vital as the parachutes we had were only TUs which could make up only about 200 metres error. Ron was the only guy who could do this to begin with, and he trained others up. It is no exaggeration to say that the Farnborough 1961 Team would have had no chance of success without Ron. He was an essential member of the team in this regard, came with us on all our trips 1961 and 1962. He was a permanent fixture in 1971, travelled with the Falcons to Australia in February/March, Paris Air Show in June, Cyprus in October and Hong Kong in December.

The parachuting year of 1962 did not start well. In the first month we had two high-profile fatalities. On the tenth of January, BPA Chairman Mike Reilly himself was drowned in the English Channel. He was jumping from a B17 Flying Fortress as a stunt double for Robert Wagner in the film“TheWarLover”,starringSteveMcQueen. On hitting the water his canopy remained inflated and Mike drowned as a result of dragging; his rig was not equipped with Capewells. Four of us attended his funeral at a little country church in deepest Surrey. He was twenty-nine years old. http://www. flightglobal.com/pdfarchive/view/1962/1962%20-%200078.html. On the thirtieth of the same month Peter Hearn, Snowy and myself were on a liaison visit to Boscombe Down. It was a pretty gloomy January afternoon, with the cloud base down to about fifteen hundred feet. Before returning to PTS later that afternoon, we heard rumours of a parachute fatality in the area, involving   the SAS team. There was simultaneously a complete news blackout from Hereford and it was not until two days later that the facts emerged. A team of eight SAS jumpers had taken off in a Handley Page Dart Herald from Boscombe to attempt a new British altitude record. Under the leadership of Dare Wilson, they left the aircraft at a height of 34,350 feet, with personal oxygen bottles, jumping on to Imber DZ. Problems arose with icing of goggles and altimeters and Keith Norry, who had over two hundred descents at the time, failed to arrive at the RV. He was found on the ground shortly afterwards, with neither his main nor his reserve handle pulled. The Board of Inquiry was unable to establish any specific cause of the accident, whilst the rest of the parachuting world could only surmise the factors involved. I knew Keith from his course at Abingdon, he now lies at rest in Tidworth military cemetery and each year I join his remaining teammates there in a brief remembrance ceremony. There was, in fact, an ironic connection between these two accidents in that Colonel Wilson took over from Mike Reilly as BPA Chairman and was himself to prove a highly influential figure in the organisation and development of the sport between 1962 and 1966.

…Meanwhile, back at PTS, the Display season was under way. Peter Hearn had handed over to Peter McCumiskey as team leader and, as the team was still not established, jumpers continued to be drawn from Trials and Training flight. The Big Six had broken up and we sport jumpers were no longer automatic choices. Nonetheless on the eleventh of May I was in the team which took the Argosy out from Benson to Clermont Ferrand in the Auvergne region of central France. The venue was the airport of Aulnat, to the east of the city, situated amidst the hills in a huge natural amphitheatre, bounded to the west by the spectacular volcanic region of the Puy de Dôme. The occasion was a National Air Display and parachuting was one of the main attractions, all over town there were huge posters advertising the star jumpers, top billing going to Jean Claude Dubois who two months previously had established a high altitude record by parachuting from 22,000 feet on to the summit of Mount Kilimanjaro. The next day dawned with crystal clear blue skies, light winds and a one hundred thousand crowd. We opened the parachuting from the Argosy with our 12,000-foot track pattern, then relaxed on the grass to watch the rest of the show. The French Army team had brought their Nord Atlas and all the French jumpers, military and civilian alike, were aboard and awaiting their turn. First out was a heavy drop from the tailgate at 1,000 feet – a Simca convertible followed out by four static line jumpers who landed next to it, de-rigged it and drove it off in about ninety seconds flat. The second pass was from 9,000 feet, with a civilian team jump. The aircraft came round again at 12,000 feet with the star attraction, Jean Claude Dubois with all the sky to himself, the focus of a hundred thousand pairs of eyes, demonstrating a superb solo sweeping track pattern picked out in white smoke, complete with live running commentary from the jumper in freefall, via a throat mike hooked up to the public address system. The final item was the French military team from Pau, who included the current 1962 World Accuracy Champion, Gérard Treves. This was an airshow that lived long in the memory. It was also to be my last RAF demo appearance for three and a half years.

In the April of 1976 No. 1 Parachute Training School was relocated from RAF Abingdon to RAF Brize Norton. Abingdon had been the home of the Parachute School since 1950, following a four-year sojourn at Upper Heyford. For many of us this was quite a wrench, a move from a base where we had been a major unit along with Nos. 47 and 53 Squadrons, equipped first with Hastings and latterly with Beverley aircraft. We were comfortable there, we had our own No. 2 Sergeants’ Mess with a more relaxed dress code, where we could have a drink wearing our flying suits after evening parachute sorties. Pace the flying squadrons, No. 1 PTS to us was first amongst equals at Abingdon. Brize was totally different; PTS was now just another unit on a large station.

Visit of HRH Princess Alice, Duchess of Gloucester in May 1977.

Back on the day job